Almost every university has a handbook which should serve as an authoritative source regarding which units a student needs to complete to be able to graduate. If you are a computing student at Curtin University, this is not the case.

Be forewarned that this is a huge tangential rant.

2013 arrived with a significant refactoring of courses at Curtin University. Many (but not all) science, commerce and engineering courses were combined into courses representing each faculty 1. Each of the old courses became majors in the new system, and what were previously majors are now known as ‘streams’.

Because none of the content had actually changed, only three ends were achieved by this process. Students would find it more difficult to search for a relevant degree with TISC and the structure of courses was made significantly more confusing, but at least Curtin’s perceived student counts for each ‘course’ would increase markedly.

Students enrolling in 2015 will be greeted with a mass renaming of all of their courses and units, purely because StudentOne, the software used to manage enrolments, was sold to a university in the eastern states of Australia. To reduce their software maintenance costs, the software’s new owners have mandated their own unit and course naming schema.

I think I’ve made my point. The powers that be often do very silly things.

What’s wrong with the handbook?

This is a whole new kettle of fish.

Luke is a student 2 who wants to start studying computing in 2015. Luke needs to enrol in four distinct but overlapping entities:

Thank the Department of Computing for fighting to ensure that degrees are awarded ‘Bachelor of Science (Computing)’ because this is Kafkaesque. While the pre-major is surprisingly correct, the major and stream, which constitute the remainder of the course, are where it all goes downhill. Let’s wear the shoes of Luke’s frustration.

Luke is scheduled to enrol in COMP2003 during year 2 semester 1.

What Luke doesn’t realise is that COMP2003 only ever runs in semester 2:

For Luke’s third year, the handbook requires enrolment in COMP3004 and COMP3005: 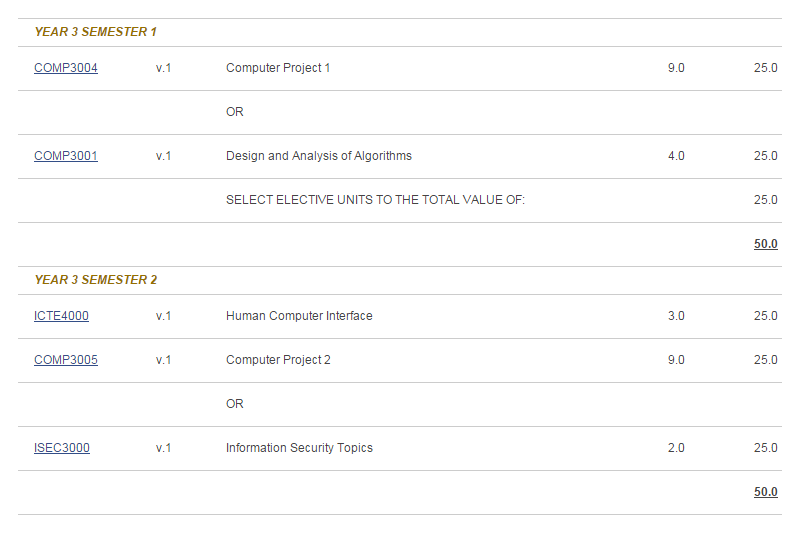 Doing so would be impossible as the unit doesn’t exist except in Sri Lanka:

What does exist are ISAD3000 and ISAD3001, which are incorrectly listed as being specific to the Software Engineering Stream, even though everyone in the Computing Major must complete them to graduate:

If Luke were to follow the handbook and StudentOne when enrolling in units every semester, I daresay that he won’t even be cleared to graduate after three years of hard work, especially given the misinformation that he must choose between COMP3001 and a final year project, when both are actually mandatory.

Who do I trust?

In a hypothetical world where Department of Computing staff don’t work tirelessly to mitigate the enrolment problems of egregiously misled students, it’d be a wonder that students manage to even graduate with a computing degree from Curtin University.

If you want an authoritative, correct indication of your course structure, pick up a leaflet from the table outside David Cooper’s office at 314.343, just opposite the reception window for the School of Electrical Engineering and Computing.